The Truth about Pitbulls

The Truth about Pitbulls

For Pitbull Awareness Day, we’re diving deep to debunk common myths. Read on to discover why breed-specific legislation is ineffective.

Home » News » The Truth about Pitbulls 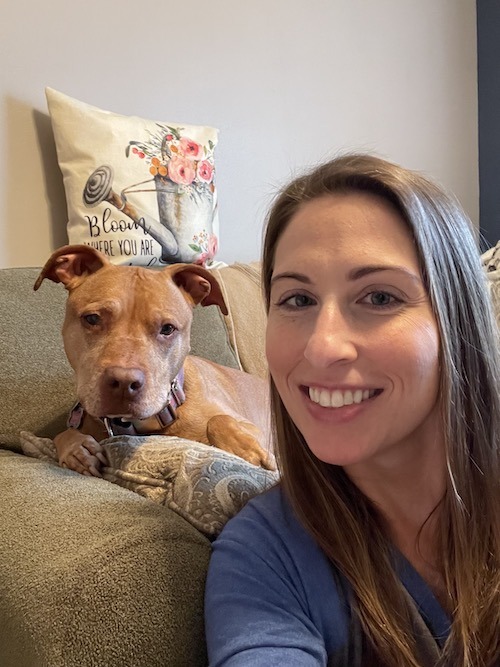 Elizabeth Kowalski holds a bachelor’s degree in biology from the University of Illinois and an associate’s degree in veterinary technology from Purdue University. After more than 10 years working as a certified veterinary technician, she chose to pursue veterinary writing, combining years of practical knowledge with a talent and passion for the written word. Elizabeth enjoys creating content for pet owners and veterinary professionals alike, and spends her free time playing sand volleyball and lounging at home with her pitbull, Piglet, and husband, Brenton. 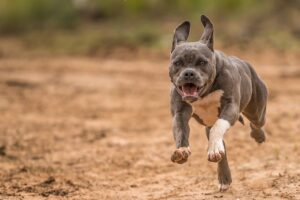 Early in their American tenure, Pitbulls were considered beloved family dogs and reliable working companions. They served their country during wartime, were icons in advertising and television, and were widely considered the “all-American dog.” In the last few decades, however, we’ve seen a substantial societal shift in attitudes toward these dogs. Pitbulls are heavily maligned by the media, surrounded by myth, and subjected to overbreeding, abuse, neglect, and breed-discriminatory legislation. The problems plaguing Pitbulls aren’t exclusive to the United States; the breed faces discrimination globally because of widespread misinformation. Thankfully, the tides are turning for these loving dogs, and many rescue and advocacy organizations have stepped up to change public perception and restore the Pitbull’s reputation. In light of Pitbull Awareness Day on October 29, we’re diving deep to debunk common myths. Read on for the truth about Pitbulls and how breed-specific legislation is ineffective.

“Pitbull” is actually a slang term describing stocky dogs with large, blocky heads rather than a single, specific breed. The dog breeds most commonly lumped in this category include the American Pitbull Terrier (APBT), the American Staffordshire Terrier (AmStaff), and the Staffordshire Bull Terrier. They all have similar appearances and breed standards. Though they are separate breeds, their origins can all be traced back to 1800s England, when bulldogs and terriers were crossed to create athletic dogs for bloodsports.

All three breeds have well-developed musculature, large heads, short coats, half-prick ears, and—most notably—friendly, confident personalities. According to the UKC breed standard for the APBT, Pitbulls are known for their friendliness to strangers, gentleness with children, enthusiasm, agility, and versatility. Many other breeds with vastly different purposes and histories, including the Boxer, American Bulldog, Dogo Argentino, Presa Canario, and Mastiff, have similar physical characteristics and can be mistaken for Pitbull-type dogs. 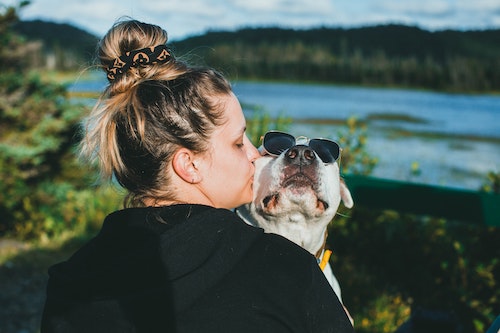 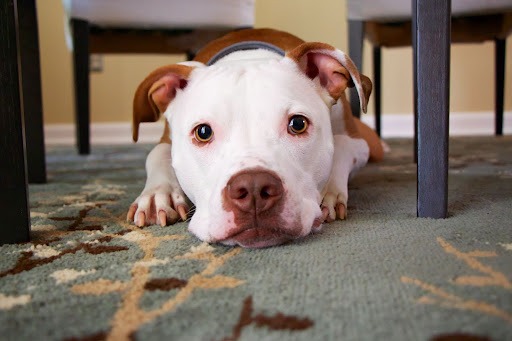 How We Got Here: Pitbull History

In the 1800s, the British lower class had limited entertainment options. Bull-baiting, where dogs attacked large, restrained animals in a ring, was popular. When the sport was outlawed, people turned to fighting the dogs against each other. At the time, the bulldog was a taller, less wrinkled, athletic version of today’s Bulldog and was popular in fighting rings. The Brits crossed bulldogs with terriers to create a dog with the same strength but more agility. “Bull-and-terriers” were bred for their “gameness,” a trait that conveyed perseverance and innate friendliness toward humans. Any dog who bit a human who intervened in a fight was removed from the breeding stock. Eventually, dog fighting was outlawed, but the breed continued to evolve. Immigrants brought the dogs to America, where frontier families used them as herders, catch-dogs for livestock and hogs, and companions. The bloodlines diverged into three distinct breeds, which you can read about here.

Pitbulls worked their way into American culture, serving in WWII, acting on television shows, and working as spokesdogs. They remained popular pets for years until illegal dog fighting became a problem in the 1980s, and criminals sought out Pitbulls to breed, neglect, and mistreat for profit. Their tough-looking appearance, trust in humans, and desire to please made them ideal targets, and isolation and mistreatment shaped them into excellent fighters. Instead of blaming irresponsible people for Pitbulls’ actions, the media demonized the breed, claiming they were inherently vicious and dangerous. New laws all over the country banned the breed, and the media sensationalized Pitbull-related incidents. Fear and myths spread like wildfire, and most dogs seized from illegal fight rings ended up in shelters or euthanized. Through no fault of their own, the Pitbull became America’s greatest fear.

When the number of Pitbulls in shelters started increasing, veterinary professionals, rescuers, and shelter staff, who didn’t understand the disconnect between the dogs in their care and public perception, worked to set the record straight. In 2007, several groups stepped up to rehabilitate Michael Vick’s fighting dogs, who proved they could love and trust humans, despite unimaginable mistreatment. Scientific groups began performing studies to debunk myths and understand the Pitbull’s true nature.

Fact: Temperament testing reveals Pitbulls pass at a rate equal to or greater than other dogs. They don’t bite more often and are not inherently aggressive, as proven in this UK study. People believe that Pitbulls are dangerous mostly because of media reports—which are flawed. This study proved that most people cannot accurately identify a dog’s breed without a DNA test, and dogs who attacked were identified as Pitbulls when they likely were mixed breeds. The CDC studied dog bite fatalities from 2000 to 2009, identifying the 20 breeds responsible and establishing what veterinary professionals and rescuers know: all dogs, regardless of breed, are more likely to bite when isolated, poorly socialized, neglected, or mistreated.

Myth: Pitbulls are physically different from other dogs.

Fact: Pitbulls are like any other dog. They were created from other dog breeds and did not develop any superpowers in the process. Locking jaws, increased bite force, and swelling brains are urban legends spread through ignorance. Bite force is related to size, not breed, and all dogs have the same skull, jaw, and brain anatomy.

Fact: After enforcing Pitbull bans for years, many cities have realized that bite rates never changed. This study in Denmark proved that breed-specific legislation failed them, and many others found the same outcome. Cities succeed in reducing dog bites through comprehensive dangerous dog laws that hold dog owners accountable for their dogs’ actions. Children are at increased risk of dog bites, so public safety campaigns teaching children and adults to interact with dogs safely and read dog body language are also successful in reducing bites. Many veterinary and rescue organizations, including the ASPCA, have published position statements establishing that all dogs deserve equal treatment to keep communities safe.

Fact: Some Pitbulls retain their dog-aggressive fighting nature, and do best as the only dog in the home, but relationships with humans have always been their forte. Well-trained, socialized Pitbulls raised in loving homes show high affection levels, and happily welcome strangers. They enjoy children’s loud, unpredictable nature, so they are especially suited to family life. Pitbull owners asked to describe their dogs will use words like happy, loving, sensitive, intelligent, cuddly, expressive, and sweet. Pitbulls are eager to please, athletically capable, and will gladly participate in activities from dock-diving, to agility, to champion couch-lounging. Their versatility also makes them a popular choice for therapy, police and military work, search-and-rescue, and service dog programs like this one that help veterans in need.

The truth is, Pitbulls are amazing dogs capable of amazing things. Many rescuers are passionate about pitbull advocacy, and the dogs are beginning to regain their footing. Twenty states have banned breed-specific legislation, though it continues to be a problem in some places. Insurance companies that refuse to house “dangerous” breeds and make renting nearly impossible for Pitbull owners are another problem.

We still have a long way to go to reduce the Pitbull shelter population and ensure these dogs are treated equally. To learn more about Pitbulls and start making a difference, check out The American Pitbull Foundation, Love-a-Bull, and pitbullinfo.org.

Looking for more articles about the life of dogs, dog-friendly activities, and pet-parenting advice? Check out the Blog at TheDailyDog.com.

PrevRead PreviousWhy Should I Adopt a “Rez Dog”?
Read NextBest in Show: How to Maintain Your Dog’s Coat Between Grooming VisitsNext